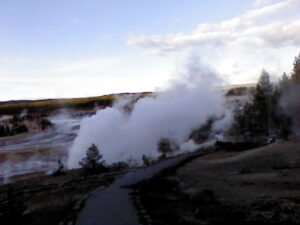 So we went to Yellowstone National Park. It is right on a fault line and has all sorts of crazy volcanic shit going on in it.

I will do my best to detail said shit below, labouring honourably despite the handicap produced by the fact that the English language is ill-fitted to describe the outlandish phenomena you encounter there.

Firstly though, I wanted to indulge in a lovely moan about the weather.

We have been kidding that we were going south to try to outrun the winter. Well, the joke suddenly got serious, because it got us.

Winter has trapped our little fingers in it’s great white vice, and the poor things are wailing blue murder.

It seemed OK in Yellowstone at first. It was pretty fresh, but reasonable.

However, neither of us slept well because the temperature took a terrifying nosedive during the night. I was actually worried that the sun had turned into a black hole.

The sun did return, but only a bit. In the morning there was a meek light coming through the thick layer of ice that had formed on the INSIDE of the windows. Our water supply was frozen solid.

We opened the door and everything was white. It was snowing; big, fat flakes came waltzing determinedly down in that semi-synchronised way they have. It would have been pretty if it wasn’t sinister. 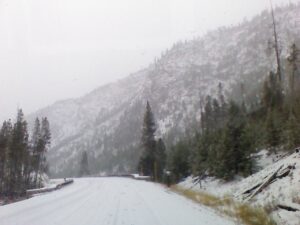 We chained up our wheels and started to drive.

We were in the middle of no-where, really we were. We moved slow along these little mountain roads, heading for places on the map. We desperately wanted to find a petrol station full of rugged Americans drinking coffee and laughing at the paltry snowfall.

But the standard for what counts as a ‘place’ is up here is shockingly low. Somewhere with a name on the map turns out to be a crossroads and a pile of logs. The site where we pinned all our hopes said it had an information centre. This is what we found when we got there: 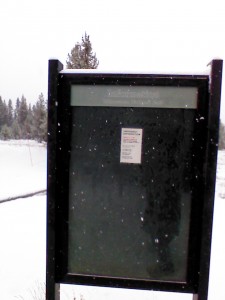 There were just all these trees, forever and ever, and they all seemed to be staring at us and saying “You idiots.”

In the end we saw this coyote and felt better. 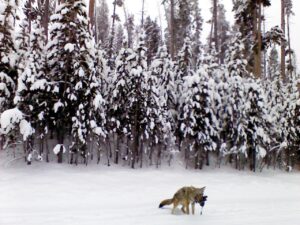 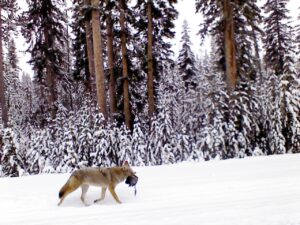 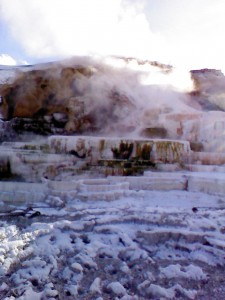 When I wrote that I thought that the ‘crater area’ where all this happens was perhaps the earth’s terrible face, with watery ultramarine irises, steamy whites, and veins of bloody rust.

But then I got to thinking that perhaps it was her laboratory where she does her experiments. After all, many scientists think it was in conditions like this one that she started life once, not so long ago.

Apparently the Indians used to say this is the part Great Creator has not yet finished. Truth be told, she’s just getting started

The last thing we see is a field full of a gelatinous violet soup. It pops and crackles.

One thought on “Yellowstone National Park”