Perhaps I should explain.

We had to go to Canada because our car, who is from Vancouver, really wanted to go home for a couple of days. I think she has a sweetheart in the Department of Motor Vehicles. 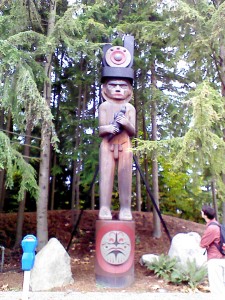 Then we went to Seattle where we stayed with a great family. They were funny and interesting and we ate gourmet burgers and chatted and laughed.

Caitlin, the ‘mom’ (which means mum), showed us the new house they were building. It is bright yellow and is on a hill. To build your own house is the thing.

The kids told us about life in Seattle and let us play their video games, which were stupendously advanced and satisfyingly violent.

Mon watched ‘football’ (which means a kind of turn-based rugby played in space suits) with the dad, who is called Paul and who has tenaciously protected his Irish accent over nearly 30 years in the States.

Paul is in the sewer business and he implored Mon to throw away his carpentry tools and “get in the underground game. The underground game is the ONLY game. No one can see what you’re doing!” He slapped his knee in mirth.

It was with heavy hearts that we said goodbye to these folks and began to head east.

We went up into the mountains. They were big and jagged and had snow on them.

After a few hours you break out onto a plateau. The landscape is like an immense furrowed blanket.

Nothing happens suddenly. There are gargantuan valleys but no gorges or drops. Each hill takes a few hours to drive up. Your sense of progress is ruined; mocked by the exaggerated scale.

It is like an ocean of land. Easy to picture wagon trains sailing slowly across it, buffeted by the terrible winds, sinking down into each crevice and slowly rising up the bosom of each hill. It must have been terrifying.

We stayed in Couer d’Alene, whose beautiful name was bequeathed to her by French traders. This was the first conservative and Christian town we have been too.

We stayed with a lady who describes herself as a devout pagan. She used to be a biker and a drug addict, then cleaned up her act because she got pregnant. She told the dude who had done the deed to “get”, and he happily obeyed.

She decided she wanted to have a faith to pass on to her son, but not the Christian one she grew up with. She chose paganism. She does rituals and celebrates the passing of the seasons.

She is sympathetic to Christianity and her Christian neighbours, but sadly they do not always return the sentiment.

Sometimes friends of her son are told they cannot play with him because his mother is a witch.

The town, despite being fairly prosperous, has lots of problems with crystal-meth and alcoholism. The children often get a very hard time there, either from parents who are addicts or parents who are abominably strict Christians.

When kids come to play with her son, or when customers come to get a massage or reiki therapy from her, they see something different. She is training to be a counsellor and asks people about their feelings a lot, she is spiritual but non-dogmatic, liberal but not an addict.

I say she is the custodian of balance and a true pioneer.

Then we drove into Montana, which is real cowboy country. We are staying in a great little mining town. It is called Butte (not pronounced “Butt”, but “Beaut”). Butte is going to get proper treatment in the next entry, which I will bring you soon. I am going to tell you everything about the place. I’ve totally fallen for it. I have been snagged on its rickety old buildings and Gallus frames, and sweetly intoxicated by the famous Berkly pit; most polluted body of water in North America. 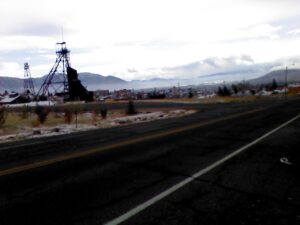 There is snow on the ground and our windscreen is iced over. From here we are going to Yogi bear’s very own Yellowstone National Park. It will be cold.

Then we plan to go to these places: 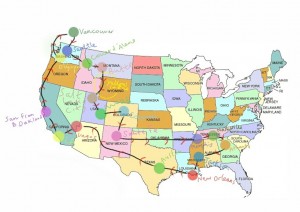 If we haven’t blown budget by Vegas I plan to get rich.

Either way I’m definitely gunning for a shotgun wedding in a drive-thru chapel. Ideally not with Mon, but we’ll see.