We decided to make a detour and go see a rainforest.

It is three days later and we have come out the other side.

I have great things to report from our travels in the million acre Olympic National Park.

On the way there human habitations make a disturbing exodus from the landscape. Hills lift you gently up into forests of fir trees.

It rains and rains. The term ‘rainforest’ conjures lush undergrowth shot through with the calls of birds, the beeps of frogs, and the whirring of insects. What you forget is that it is raining there, and that this is it’s chief characteristic. 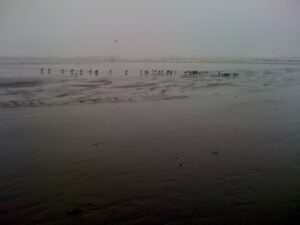 We go through small township. Everything is grey. The whole place has one splash of colour to share: a pile of pumpkins waiting sombrely for Halloween.

We get to the sea and park on the beach pretty much. We take a walk. The sand is as grey as the drizzle. The waves are even greyer. Some grey birds pad about listlessly in the sand. We watch the surface of the water. Somewhere out there in the grey, grey whales are baking in the freezing greyness.

The next morning, miraculously, the sky is clear. We drive on.

There is a small shop at the side of the road. It sells trekking stuff. Mon’s trainers have holes so we stop off. It is the end of the season and they are having a sale.

The girl keeps dropping the price of everything we touch. The whole place is haemorrhaging value beneath our fingers. I get a t shirt with wolves on it and some postcards. Mon gets some shoes.

She warns me that whether there are actually wolves in the forest is a matter of some discussion, despite their dominance of the merchandise.

Even though she saw one outside the shop once, she still hasn’t decided which side of the debate she is on. This strikes me as highly democratic.

Wolf or no, there are certainly coyotes, bears, and mountain lions. They are hundreds in there, the girl nods matter of factly. In fact right now they are stocking up their supplies preparing for hibernation.

It’s funny because I had literally just been saying to Mon how much I would love to spend the winter being slowly dismembered in a hole in the ground.

I ask the girl if she is from around here, she replies that she is from Idaho. She moved to be close to the ocean. I asked her if she surfs, she nods.

She could have moved to southern California; the warm and sticky centre of international surf culture. There would have been surf bands, surf shops, surf cafes, sex wax, sunny beaches, lifeguards, and surfers in spades. 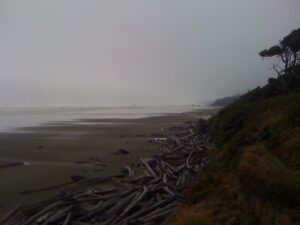 Instead she has moved here, to a bleak and desolate stretch of coastline in the northernmost tip of the USA (excluding Alaska who is cheating).

She treks the mountains and the forests, and she surfs on that cold and inhospitable beach, all alone. The sea is a freezing, formidable mouth.

Along the river, the rainforest begins. Suddenly, BANG! everyone is green. The light itself is absolutely soaked in green, it skulks around like it has been egged. 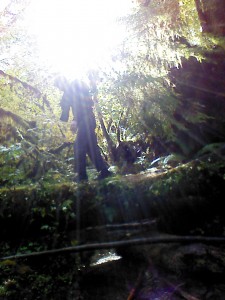 Millions of trees (maples, cedars, sikta spruce, western hemlock) all compete to grow tallest and widest fastest. Everywhere tongues of lush green are reaching out to lick you.

The redwoods in northern California were bigger. Redwoods are as thick as lighthouses. But the trees in the rainforest are bloodthirsty. They twist round each other, throttling their competitors; smaller spruces grow from older trees, piggybacking on their height, stealing their light. 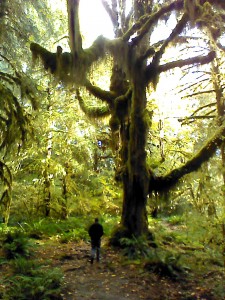 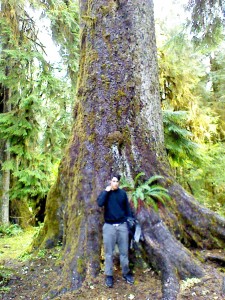 I’m sure that if you slowed time down you would hear their desperate green panting, their gnarly threats and their Olympian bragging.

Each one is drenched in lichen and moss. Great beards of the stuff hang down from every branch.

We keep meeting the river. It rushes along, sick with rain and full of grey soil. It is the Hoh river. The tribe who lived on it when it was ‘discovered’ by Euro-American explorers in 1895, and who have a small reservation here today, say that the river was created as a powerful fellow called K’wati was chased by wolves through the dense pillars of the forest. 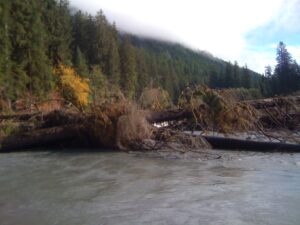 In a magical panic he threw the river out behind him as he went, trying to drown his pursuers. He ran all the way to the grey beach, and was safe. This explains why the river bounces and rushes so, and why it snarls like a wolf.

We saw elk and a tree frog. 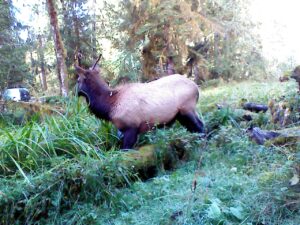 North America has a problem with naming. The standard is low. It is like they named everywhere in a hurry. Mostly they are stolen from Europe, and even then they re-use every name a couple of times. So you type in the name of a town to your gps and then after a couple of days drive you discover that you are going to the wrong Austin in the wrong state.

The Northwest is a mighty exception. The native names are gorgeous, and some of the Euro-American ones are very fitting. I will leave you with a selection of my favourites. 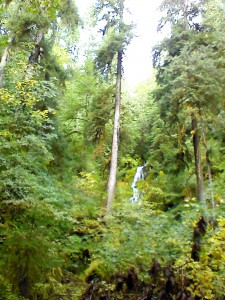 One thought on “Olympic Trek”