We are staying on a ‘compound’, which means a kind of community where everyone has their own houses, but they share a garden space, chickens, and a fire every night.

On the night we arrived we hate oysters and learnt Cajun dancing.

Mon is learning Cajun cooking. So Bristol has much to look forward to: Gumbo, Jambalaya, Corn Macque Choux, Corn Bread and Boudin.

We borrowed a canoe and took it on the Bayou.

I have heard Hank Williams sing about ‘The Bayou’ before, and never really knew what it was. Turns out they are sort of big canals. 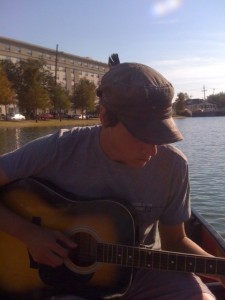 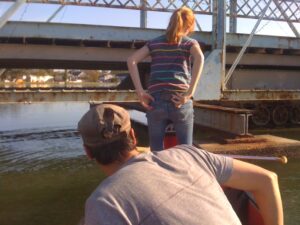 Me and Mon canoed up toward lake Ponchartrain with Lily, who is 14, and one of those teenagers whose canniness puts the naive panic of your own teenage years (which are kind of still going on truth be told) into stark relief.

We parked the canoe and climbed over a fence into a cemetery.

Lilly was climbing over everything and breaking into mausoleums left right and center.

She said that if you “get lucky” then you find a tomb with a crack in it, and you can stick your head in and have a look at bones.

Once she found a crack in an ornate tomb that was just wide enough for her arm, so she stuck her phone through and took a picture. The picture revealed a skeletal hand holding a SWORD.

Lilly wants to be a Forensic Archeologist. 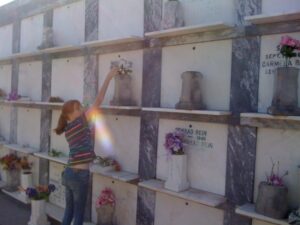 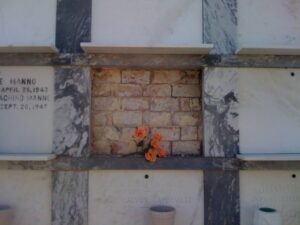 She put flowers on the unmarked graves.

We had Thanksgiving, which is an eating festival.

These are some of the things people say when you ask them why it happens:

– It was the early settlers from England saying “MAN I’m glad we’re not in England.”
– It is post-revolutionary America saying “MAN I’m glad we’re not England.”
– It was a special day when you would stop killing Indians and share a meal with them instead. (They next day you would sleep in and then resume killing Indians about 11 or so, maybe hand out a few poison blankets – and then eat leftovers.)
– It is a special day set aside so that people can overeat with their families, have an argument with their dad, then watch some guys in spacesuits take turns head-butting each other.
– It is simply a day to be thankful for good things.

Whatever the reason, Thanksgiving means cooking for a week and eating for a day. The spread of food that was laid on here at the compound yesterday was truly spectacular.

There were three massive tables which were swamped with homemade food, TWICE (brunch then dinner).

There were Cajun treats, stuffings, vegetables, salads, syrups, two inhumanely large turkeys, and (for me the piece-de-resistance) sweet potatoes baked with a crust of marshmallows.

If any of you dare look down on such practices, well then you’re an old-world fool; a dinosaur who needs to get with the program, damn you and your bland sandwiches. Americans are INNOVATORS.

Sweet and savoury are not separate here, they mingle flirtatiously.

(For perhaps my favourite instance, take the ‘corndog’: it is a SAUSAGE in a DONUT. Genius.)

Anyway, it was objectively the best meal I have ever eaten, and I felt pleasantly like Harrison Ford in Witness having a tasty communal time with the Amish.

We got really drunk and sat around the fire singing songs together and telling stories.

Soon to come: MUSIC, a trip to CAJUN COUNTRY, and a visit to a VOODOO TEMPLE.

If you’re in the mood for more blogs, check out my LINKS page, I put some of my blog buddies up there. 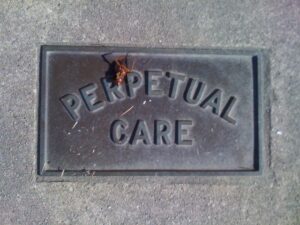