We came down from the mountains. The freeway just keeps going down and down. It went down for all of Jimi Hendrix’s A Love Supreme, then for two whole CD’s of Doc Watson.

Eventually you are in the desert.

Salt Lake City is built on the flats. Full of trees and greenery yet surrounded by inhospitable mountains and desert, you can see why the Mormons settled here after their exodus from the east. It is proper biblical.

We had many adventures. We spoke to Mormons, ex-Mormons, a limo driver who has made waffles with David Bowie and has stolen an avocado from Woody Harrelson, a bad-ass roller-derby girl (she took us on a date to the cinema), a funny guy who we invited to RULE England (so watch out), and a German pilot dressed as bones. Then we went south to Arches National park. It is the most gorgeous place either of us has ever seen. 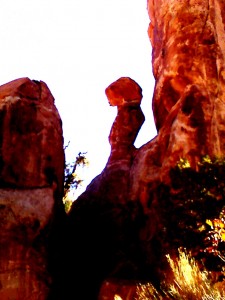 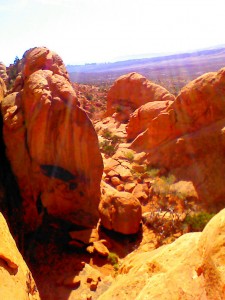 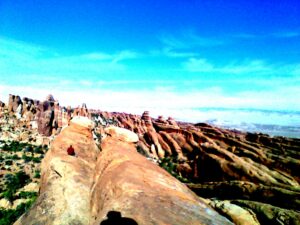 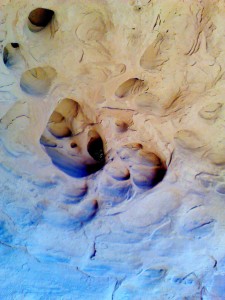 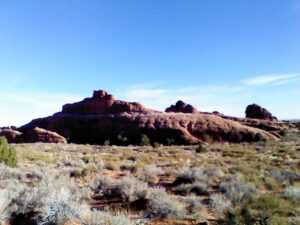 The wind whittled these things out. This is the wind’s workshop, the wind’s playground. This is where the wind comes to unwind.

You can see the wind’s fingerprints.

Here is a submarine. Inside, stone Sailors obey stone orders and eat stone salad in their stone canteen. 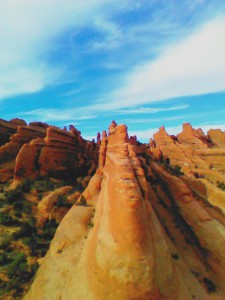 Here are some more ships. There is some kind of sand stone naval war going on, obviously. Unfortunately the action can only be appreciated by those functioning on geological timescales.

I’m slow but I’m not that slow. Possibly dad is. Dad, can you see geology happening?

Then I realised maybe the whole place was one person. It was a man. A man both slender and bulbous. I think he is a wrestler of some sort. 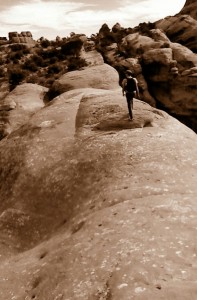 He is famed for his hospitality, and on the advice of a friend, you go to his house in the sky. It smells really nice. Sage mixes with a notes juniper berries and spicy pine.

The air is still. It is so quiet, you can hear the soft bellies of the lazy snakes as they slip along the sandy floor.

“Hello. Hello?” You say, timidly. There is no-one in. But O, there is. “He is sleeping!” laughs a desert rat. “The Master is sleeping…” he repeats, more thoughtfully.

‘The Master’ is too big to be seen in his entirety. Best to take in bits at a time. Here are his knees. 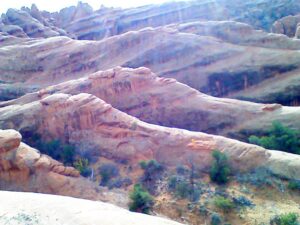 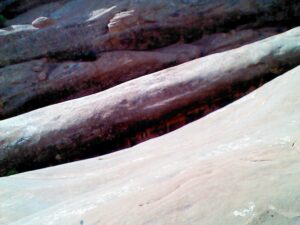 Being so old, his knees are quite wrinkled looking, but he has some lovely smooth limbs too. I wonder what moisturiser he uses? 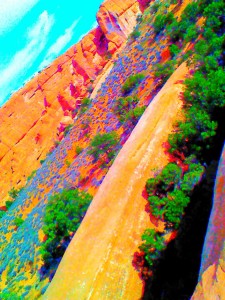 I believe this is his forefinger. 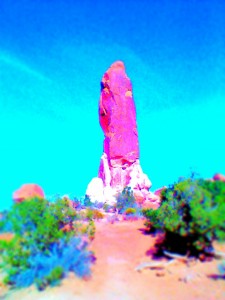 He yawns and you can see his gnarly teeth and his mouldy green tongue. 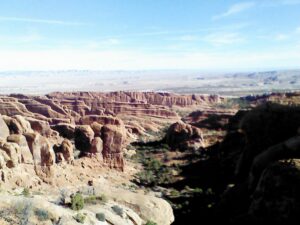 He dresses in the morning; wrapping it around himself like a kimono. You would hate to admit it but he wears it well, his skin is soft and cool. He lifts you up. 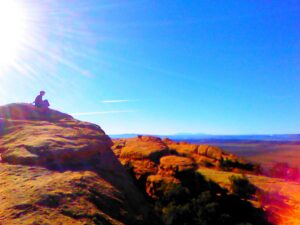 It is the desert, but it is replete with life. Everything seems in such harmony. Take the pattern of the sandstone here, along with the grain of the juniper tree. 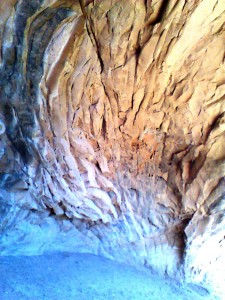 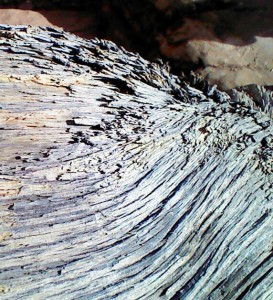 Standing atop one of the pinnacles here, we experience a flurry of emotions, fear, exhilaration “I feel like I’m flying.” Mon says.

Then, into this building euphoria, came a destructive little thought. It was something I had heard on the radio, this scientist’s theory that the reason we like standing atop pinnacles and looking at vistas is that we have evolved a wariness for places that have lots of hiding spots. 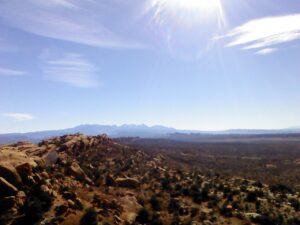 When you have a panoramic view such as this, the potential for a preditor to sneak up unseen is zero, thus the body rewards itself with some positive feelings.

There is something so dispiriting about this. The overpowering vividity of the perfect spot at the top of the world is deflated by the mechanics that explain why we experience it as vivid.

Then I was reminded of a conversation I had with my friend Christopher Southgate, who, greedily, is a poet, a theologian and a scientist.

Arrogantly, I had confronted him with my armoury of sociological interpretations of religion. “Religion is not explained by some a-priori ‘spiritual yearning’, Chris.” I quipped.

Marching inexorably to my devastating conclusion, I continued “Rather, religion plays a pragmatic function in society.” My eyes were shut as I got deeper into the flow. “A church or temple is part of the economic functioning of human life, it helps maintain the status-quo, mofo.”

“It is survival. Just a part of how we have made it this far, like the plow, or pancakes. Wake up and smell the pancakes!” I screamed in rap voice.

“Yes” he agreed, quietly overjoyed, “but it still points to God.” 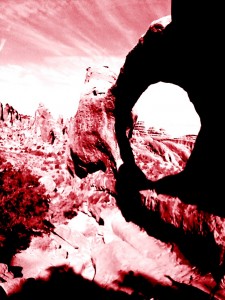 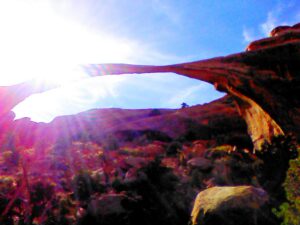 What we felt atop arches, with everything alive and pulsing under the pressure of our eyes, was perhaps entirely explainable with reference to our nervous reactions and neurological activity.

But that doesn’t mean it wasn’t divine. 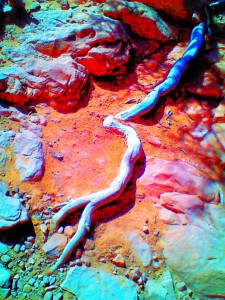 One thought on “Gods of the Desert”