I had barely been back in San Francisco twenty minutes and had seen no less than three separate drag Santa-ettes.

When I started this blog I promised all the goss on what Mon is eating, for as you are probably well aware, there is an expanding network of cultish interest around what goes into this guy.

I know that have skimpt you a bit so far, hungry fanbase, so right here in our very last USA blog, I’ll give you a generous topping of insider’s chit chat concerning the gastronomic superstar’s fave eateries in all of ‘Frisco.

Ben Krupp is a friend we have in here. Ben has provided us with so much, sandwiching our trip with succulent hunks of prime hospitality. He is like the Lockheed Martin to our American Military.

Among other things he is a lover of food. When we first arrived he told us very firmly NOT to go to any Mexican restaurant until he had time to take us to the real deal. The real deal turns out to be a joint in the Mission district called Pancho Villa.

Me and Mon went there again just yesterday. You line up and go along the counter like in a Subway, answering a string of incomprehensible questions. Luckily Ben has taught us how to do this, otherwise I would have panicked and started crying.

I was at the pickle table when our number was called, and I had the ticket so Mon rushed over to me looking sick with worry. Once we had got our food and were sat down though he settled right down, studiously pouring a different salsa on every bite of his burrito.

As we were exiting I heard him mutter “delicious.”

The other place was this little cafe in China Town. San Francisco has a huge Chinese population that has been there as long as anybody. (Except the native folk of course, who, by the way, think Alcatraz is a sacred island when actually it’s a jail!) 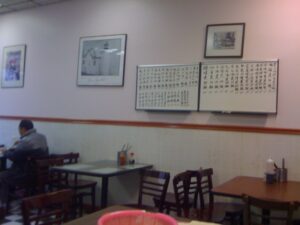 We were hungry and I was grumpy and we went in to this cafe not knowing what to expect. Judging by the looks the old guys sat at the plastic tables gave us, we were the only white people ever to have walked in there. We chose numbers from the menu at random, and with the exception of a dish that tasted like spleen marinaded in bile, it was incredible.

It was so cheap that it made me really curious how it was all possible. We played with a little toddler and let her smash up our camera. She was overjoyed.

San Francisco is full of these hills. Because I am a utopian idiot I always assume there will be a glorious vista over each crest. 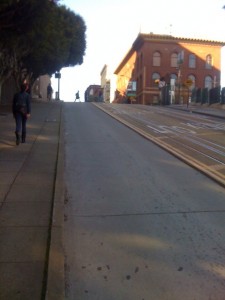 And sometimes there is. 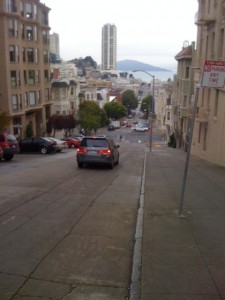 OK I love you goodbye.