I have this little maxim: ‘Pretend you are in Utopia until further notice.’

When I am going about the earth I try not to assume that things are irreparably messed up, that the apocalypse is imminent, or that people are irrationally murderous selfish maximisers. Instead I assume I am walking through a perfect world of harmonious equality, open hearts, and superb haircuts.

If you’re anything like me: prone to episodes of confusion, unease, and pure terror, then this simple technique can help you feel at home wherever you are. People like you more too. They think to themselves “There’s something Utopian about this guy.”

The ‘further notice’ refers to the moment you confront the Dystopian. It would be messed up if when I came across some industrial waste spilling into a bird sanctuary, I carried on my little game.

The thing that stops you pretending Utopia in the USA, much of the time, is the issue of race, particularly that tension between ‘white’ and ‘black’ America.

As an outsider at least the really disturbing thing is that black people are so much poorer. Class in America has a strong racial element. I’m still getting my clumsy British mind around the whole ‘entitlement’ debate, but basically at the heart of it seems to be the accusation that poor black people are claiming welfare and enjoying it too much.

Recently we went to see a show about race called Tar Baby. It was a solo show by Desiree Burch, who is a black actress and performer. I thought it was very funny, and very good.

It contained an alarming section where she got the audience all wrapped in a sheet-fort. It was like those ones you made as a kid, only it was big enough to fit a whole audience in, rather than just a few cousins and a reluctant cat.

She then proceeded to unleash torrent of diatribal ranting on the issue of race. The first five minutes were so moving that it made me cry. It went on for a long time, probably twenty minutes. Her voice was ragged at the end.

It was interesting talking to people after. Many of the white Americans had found the rant very grating. They felt accused, and as non-racist people who go out to shows about race with their friends of many races, they knew the accusation was not justified.

I strongly suspect that what they found really unreasonable was the twinge of guilt they felt. Why should they feel guilty? This guilt has been put on them, despite their lack of responsibility.

I have got the impression many times from white Americans that they are tired of the issue being brought up. They genuinely and fervently believe in racial equality themselves, and are happy that so many battles have been won – even the president is black, so why will the issue not go away?

There you are, walking around in your Utopia, and suddenly someone is accusing you of racism, or you are accusing yourself. Why? Why are so many black people still so aggrieved? Can’t they move on? Civil rights was years ago, slavery even longer in the past. How long will it take?

We’ve just toured Cajun country. The British treated the French-speaking Acadians like crap, chased them out of Canada for no reason. Everyone in America treated them like crap too. They had to make their home in a swamp. But they settled down pretty good. They eat a lot of chilli-peppers and take it slow. You don’t find them complaining.

So what is going on with ‘black America’?

Tar Baby was all about feelings and identity. Desiree had told us how she had been born in a white area of California. Her parents were the only black people she knew until she went to college. She was talking about how it was a strange thing to be pretty much white, but obviously black.

I felt that the question the show posed was why has this woman, who hasn’t experienced direct racism or oppression, so angry? Where did this twenty minute explosion of emotion COME from?

The collective American mind, hosted by black and white people alike, provides identities for American’s to BE.

Like it or not, we are slotted into an identity from birth. They can be sculpted perhaps – but not made from scratch. Identities are fished from the communal pool of our ceaseless bantering.

Identity is as fundamental as WOMAN and MAN, and as niche as EXPRESSIVE GAY MALE, COY BUT BUSINESS MINDED, WITH NICE SHOES AND POSTER OF BILLY HOLIDAY.

Tar Baby described the strange struggle that Desiree has had with these expectations. Her teachers, her friends – people she loved, her parents even – fellow black people, expected her to behave in a ‘black’ way.

The funniest part of the show was this bit where she was describing going to auditions and being told, obliquely, to ‘black it up’. “Couldn’t you do it, more kind of… urban?” They would ask.

Similarly, the black friends she made in college would say she was acting too ‘white’.

She got the audience to help her be more black. She kept repeating the line “Hold the Elevator!” and we shouted out stuff that makes someone ‘black’: a swagger in the walk, a certain waggle in the finger, more accent, more swearing, and on and on, until she was a screaming, dancing, head-bobbing mess.

It took me a long time to make peace with being LIBERAL WHITE MIDDLE CLASS BOY MAN. I felt I was a unique individual who couldn’t be squeezed into a box – and for sure I was right.

But unfortunately, while not having a secure identity have its benefits, in my experience for the most part it is unpleasant, and makes you prone to a viscous array of mental health problems. Part of being comfortable in the world is accepting where you come from, and what you look like.

I know that the identity is NOT who I am, but I accept that it is the vehicle through which I operate in the world. It may not be the most racy of identities, but old ladies like me and the police only give me a moderately hard time, even when I’m clearly breaking the law.

And, it is important to admit that despite the infinite possibilities afforded to me, the things I do, say, wear, the kind of job I aspire to, even my values – are all fairly congruent with LIBERAL WHITE MIDDLE CLASS BOY MAN.

I think that people from minority communities often feel a sense of unnerving disconnection from the identities – the ‘ways of being’ – allotted them by society. There is something sinister, patronising, or alien about them.

As far as the black American repertoire goes, many of them tend to be inferior in some sense – even the so-called positive ones.

Think of the movie The Green Mile. Here is the position given to black people at it’s most sentimental and pronounced: ignorant, strong, innocent, sad, and imbued with mystical powers.

The idea of ‘Black America’ is in a dance with the idea of ‘White America’. The dance is very very beautiful – but it also crushes people.

The dance reflects the historical realities of real black and white people to some extent, and it provides outlets for the immense wellsprings of subterranean emotion created by this reality.

Often it is the black identities that function as outlets. Black people can say things that must remain unsaid in ‘white America’. They sing the sad songs and shout the angry things, they hold the sombre wisdom that carries a cane and that “Known hard times”, they make jokes about race, they talk openly about the need of money, and the love of wealth.

Tar Baby was about was the way that Desiree had, against her will, become ANGRY BLACK LADY #314.

Anger is history’s gift to her, anger is her inheritance. The world wanted her to be more ‘black’ because she was black. To be ‘black’ is to have been once enslaved, it is to be poor and maligned.

When feelings are involved, it is pointless to say that someone shouldn’t be feeling a certain way. At most you will just force them to feel it secretly.

What was liberating about Tar Baby was the way Desiree expressed these feelings – not bubbling behind the lyrics of a song, not coded into the rhetoric of a speech, but rather as a direct, organic, ugly rant – the feelings as they would come to her in her most private place (the sheet fort).

Of course, this is just the kind of namby pamby guff that LIBERAL WHITE MIDDLE CLASS BOY MAN always comes out with. 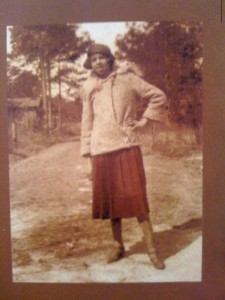 Meanwhile, out in rural Louisiana, we went to a Zideco dance; the “Zideco CULT” as one devotee described it. Zideco is a creole music. Creole indicates the mixing of the French Cajun culture with that of the African, via escaped or freed slaves who came to the mainland from the Caribbean.

Add to that a sprinkling of Spanish, French French, and native American influences, not to mention blood, and you have yourself one sumptuous melting pot of music, religion, food, and language. 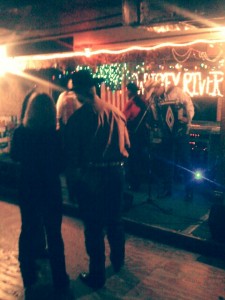 The guys at the dance all wore brightly coloured pressed shirts, spangly belts, and cowboy hats.

The opposition here is not between black and white it is between Zideco and nonZideco.

Black, white, large, small, young, old – all dance together. The music is overpoweringly hypnotic. Not being much for footwork, I was simultaneously relieved and distraught when an 81 year old man, muttering in French, swung by and stole away the beautiful Cajun princess who had been graciously allowing me to trample on her toes.

I watched them waltz away under the lights. The swamp outside cackled to itself. The music swirled about.

I pretended I was in a Utopia for the whole night and there was no further notice. 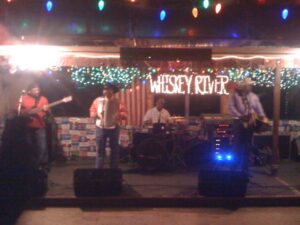