Long waits in stations, truck-stops, borders and so on make up great swathes of the actual flesh of adventures.

Waiting for hours while a customs official turns your anus inside out, or insists on a telephone interview with your grandmother, or keeps asking you to explain how you got a light dusting of meth-amphetamine on your visa, you feel bored, scared, tired and wired, all at the same time.

Tales of such hiccups are easily as mundane as the original experiences. I’m still going to share mine and everything, I just want to make sure you know that I know they make boring stories.

We sold our car to a man called Hugo. Like almost everyone we have befriended in Texas, Hugo is Mexican. Hugo’s dad came over here as an illegal. He worked hard, spent all his money on buying desert, and is now a fairly wealthy man. He is old now, but the police still stop him because he is a Mexican driving a nice car.

The violence has now reached a level where victims are hung from the bridges on the freeway. Every Mexican we met is saddened by the horrific decline of their country over the last decade or so.

As an old joke puts it “Why does Mexico not have an Olympic Team? Because any Mexican who can swim, run or ride is American already.”

I can understand the tension in Texas. The white community is on the front line of where poor Mexican’s try to gain entry to the United States. If you are poor and white, the last thing you want is people undercutting your wages.

However, it is important to remember that not only does the USA have enough space and wealth to take on these refugees of the Mexican drug wars, and not only is it directly funding BOTH sides of the war in the first place, but America only functions like it does BECAUSE of Mexican illegals working for under minimum wage.

We all stood around Hugo’s truck, drinking beers and chatting away.

Hugo let us stay in his house, then in the morning his mum made us lovely, hot, sticky, spicy Tamales.

We hitched to El Paso, catching a ride from a Mexican cowboy. He didn’t speak any English at all. In an effort to reach out to us he flipped the radio from the Mexican station he had been listening to, to a pop one; probably thinking that because we were white than that is what we liked.

Trying to explain otherwise only resulted in him thinking I wanted it turned up. So we listened to pop for four hours or so. Mon said he felt like he was having brightly coloured plastic mashed into his ears with a toy hammer. I actually quite liked some of it.

We had a place to stay in El Paso, but we were dropped off on the wrong side of the city. Turns out it is a big place, and that it’s bus service closes down by 7. We were guided across the city by our host, a miraculously brilliant individual named Debarko, who is an Indian man studying something complicated at the University of Texas.

Debarko was so calm as we struggled across El Paso, hitching lifts or dragging our immense bags down the side of six lane freeways. I felt like I was in one of those spy movies where they have a boffin in an office guiding the hero. Man, did Debarko have some luckless, bedraggled, hopeless heroes on his hands that day.

Eventually we got to him, he came to meet us in the street, bringing a flask of tea. He cooked us a meal and gave us some magic-Indian-get-better-paste. We owe him everything.

The next day we found a really cheap bus to LA. All of our contacts fell through, so we called a friend of a friend of an eccentric lady we had met in New Orleans. Tipsy on cocktails, she had insisted that we MUST call Lynn if we were in Southern California.

Lynn lives in Laguna beach which is a holiday town south of LA. We meant to stay with her only for a night but it turned into three. She is interesting and kind and well travelled. Retired now, Lynn was an art teacher, a sculptor, and a stained glasserer. 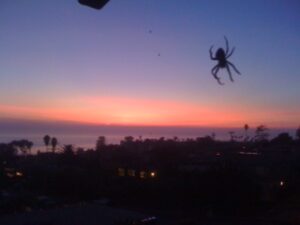 We snorkeled in the great kelp forests – spying starfish, leopard sharks, bright orange Garibaldi fish, and their young whose purple spots seem to be lit from within. The “winter” sun shined passionately above, and the few rays that managed to penetrate the swaying kelp danced in the water like transcendental eels.

In my head when I think of England I picture service stations and clouds of teenagers clogging up the foyer of Boots, but looking through pictures Lynn took when she sojourned in my native land, I realised that England is a beautiful, quirky, friendly, exotic, facinating, FOREIGN COUNTRY. Wow.

We are now back in the Bay Area, where we began. Perhaps the hardcore among you remember me gushing that Oakland was some kind of paradise. Well, we got here late last night, were picked up from the station, and spent the night eating chicken soup and arguing about philosophy (so I was right).

Soon we will go back to San Francisco and see all those friends we met at the beginning. Because we have been travelling it feels like eons have past since we saw them in September. Because they have been everydaying it will probably feel like only minutes ago that we were last taxing their hospitality.

Those of you in the old country, watch out, because come Thursday we will be taxing yours once more. If you could bake us some cookies (soft biscuits), that would be great. We will have one day together before the world ends.